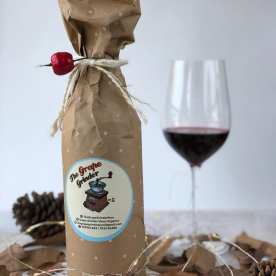 Causa means cause. That is, the literal translation of the word. The reality is that no known explanation of the dish’s name is convincing enough. The recent revival of Peruvian Comida Criolla has brought up a number of books and researchers, each one with a different interpretation of the origin of this most popular plate.

One of the stories has it that during the war with Chile, in the late 1800’s, the army failed to provide enough food to the troops, and the soldiers’ wives had to supplement their paltry rations from their own pocket. Their budget was pretty tight and all they could ill-afford was potatoes of the yellow “Amarilla” variety that is so dear to Peruvians for its starchy, velvety texture and aromatic quality. Not having anything other than salt, a few key limes and spicy hot aji peppers, ubiquitous in the country, the ladies boiled the potatoes in salted water. Once cooked, they peeled the potatoes and mashed them, added crushed aji peppers and many drops of lime juice. A Spaniard fighting along the Peruvian soldiery volunteered his most precious treasure, which he had received from his mother and which he kept hidden under his campaign mattress. He produced a half full bottle of olive oil. Added to the mashed potato mix, it made it more kneadable, gave it body and improved its taste by an order of magnitude. Knowing that just spicy potatoes with oil and lemon would not satisfy their hungry husbands, the senoras went around knocking doors and asking patriotic citizens to contribute to “la causa”, the cause. With the addition of fragrant red onions, cans of pickled sardines and a sprig of cilantro they created the dish. The onions were summarily chopped into fine pieces, fate that was shared by the cilantro, and were then mixed together with chunks of sardine and seasoned with salt, pepper and lime juice. So prepared, they served as an appetizing topping for the Causa mix, which had already been molded on the ladies’ hands in the shape of concave buns.

The story may be completely spurious but it nevertheless makes a clear point about the origins of the creation: humble and uniquely Peruvian. Unlike Ceviche or Arroz con Pollo which are made in many Latin American countries, or Pisco, the Peruvian national drink, which origin is hotly contested by Chile, there is no similar dish anywhere in the Americas, making it a truly undisputed Peruvian creation. Causa is a favorite appetizer of Peruvians, for all good reasons. It is easy to make and its tangy flavor is refreshing, slightly spicy and citrusy.  It is also very versatile, being served as an appetizer or as a main course and amendable to a variety of fillings or toppings.  It is a great picnic meal and kids love it. Causa can also be stored it in the fridge for up to two or three days, depending on the filling. Causa is usually filled with canned tuna or shredded chicken but you can have it vegetarian –with avocado, cooked green peas and carrot- or filled with shrimp tails or other seafood, like octopus.

3 teaspoons dried yellow aji amarillo powder or a whole aji Amarillo pepper if you can get the conserved product.

Oil for the pan

Potato paste. Cook 2 pounds of Yukon Gold potatoes in salt water until tender, but do not overcook. Strain and cool enough so that you can peel them. Potatoes should not cool down completely, as they are not easy to work with when cold. Mash thoroughly and set apart. In blender put together ¼ cup vegetable oil, two teaspoons of aji Amarillo (if you have dry powder) or two to three whole seeded peppers (if you got the glass jar version) and the lemon juice. Mix at low speed until homogeneous. Knead the potato mash, adding the blended mix gradually until a firm paste is formed. Using hands, grab a handful of the paste and shape it into a bun. With fingers make a cavity on the top and put away in fridge.

Chop half red onion (or a whole one if you like the taste of this great vegetable) and rinse thoroughly under running cold water if too pungent.  Strain and mix in a bowl with ½ cup of mayonnaise and the juice of two key limes or one thin skinned lemon. Add your filling of choice: Canned tuna, cooked shrimp tails, shredded cooked chicken or mixed vegetables, avocado, etc. Serve this mix in the cavity formed in the potato paste. Sprinkle with finely chopped cilantro or parsley, further cool in fridge and it is ready to serve. 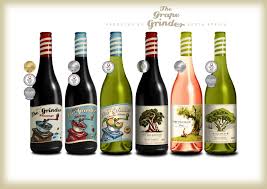 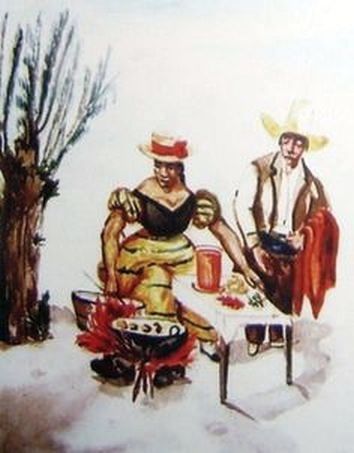 There is nothing more traditional in Lima than the sight of a brochette street vendor, an anticuchera, surrounded by a cloud of hungry patrons. As night falls, shops and cafes close and a woman of black African descent rolls her wooden cart to her favorite corner.  In the semi dark of the poorly lit street, the flames and flying sparks from the burning coals are a prelude to the oncoming feast. The woman blows the coals with a palm leaf fan and the fire crackles. The alluring smell of burning coals and animal fat vaporizing on contact with the heat, attracts customers and soon there is a small crowd surrounding the cart. Old and young, some sitting on crude wooden benches, most standing, chatting lively, they all wait for their order of anticuchos, while sipping Inka Kola or a cold beer, drinks sold by the anticuchera’s assistant, a young girl, usually a daughter or niece. As they chat and drink, they all keep a keen eye on a large bowl bursting with neatly skewered pieces of marinated beef heart.  The early birds, who already have their skewers cooking on the grill, closely monitor the glistening meat cubes, sometimes turning them over themselves, letting the anticuchera know how they want theirs done. As the woman flips the anticuchos, she grabs a brush made from a corn sheath and, after dipping it in basting oil, she whips the brochettes. The excess oil burns off over the coals and flares up in a large flame, lightening for a second the customers’ eager faces. As the orders get ready, the assistant prepares the plates, usually bright cheap plastic ware, garnishing the skewers with boiled potato and large kernel corn, plus a good serving of hot sauce. The latter is unique to the trade, consisting of blended rocoto hot peppers with lemon juice and chopped green onions. Satisfied patrons finish their servings, clean their fingers with “servillets” torn from a roll of toilet paper and leave, only to be replaced impatient customers, who anxiously wait their turn. Business goes on briskly for a few hours, usually until eleven, sometimes even later, especially during the Lord of Miracles festivities. By midnight only the antichuchera and her assistant remain, tidying up in silence and then, just as they came, they roll the cart back. The whirring sound of the cart’s wheels fades away as they disappear into the shadows.

Although nobody can ascertain the origins of the Anticucho brochette, it is hard to dispute that it has an undeniable African air. Not only the word has a black African resonance to it, but also, since time immemorial, the trade in Lima’s streets has been traditionally associated to the black folk. Furthermore, to reinforce this idea, marinated meat and organ brochettes are very popular in North and Sub Saharan Africa, as well as in Congo and other locations. Just like in Lima, and other parts of Peru, the trade is mostly exercised by street vendors.

The basic process of Anticucho making is to marinate the meat –up to ten hours- thread it on a skewer, and grill it over a fire. There are no exact quantities for the ingredients in these recipes: how you make your marinade depends on how much meat you are cooking and what ingredients you like. The marinade itself is very simple: vinegar, vegetable oil, aji panca (in lieu of it, Paprika or red curry paste work well), crushed garlic and cumin. Beef heart, although it is alien to the North American palate, once marinated and grilled this way can be firm, tender, juicy and just plain delicious. However, for the faint of heart or not very adventurous, substituting beef tenderloin for the heart works well, with the proviso that the marinade step needs only two hours.

2 tablespoons of aji panca paste. If not available replace with paprika or red curry paste

This dish can go extremely well with a ripe, spicy Zinfandel. In lieu of this varietal, try Aglianico del Vulture or a Malbec from Patagonia.